Elite Team Sandbaggers - Behind the Scenes #3 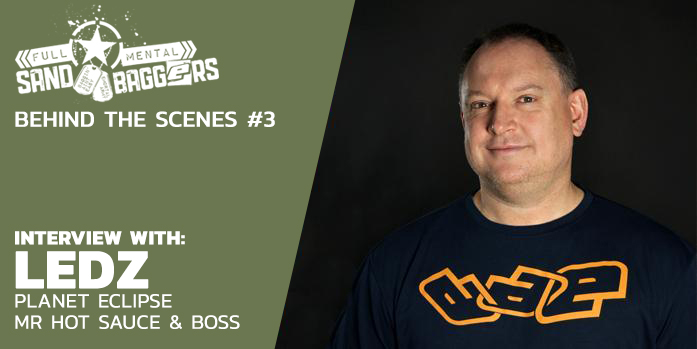 Last weekend the Planet Eclipse Elite Team Sandbaggers played at the www.ScenarioBigGame.com in Poland for the first time. We took the opportunity before the event and asked Ledz some questions.

Who are the Sandbaggers?

Our first ever outing was at the Millennium at Crystal Palace where Stephan Wildemann and Tomas Heitmann also played. Since then we have gathered all sorts of players from around the World. We take in all sorts of strays to play with us. You have to be a friend, have the right attitude and know that it’s about FUN more than anything else. If you tick those boxes you might get asked one day.

Where does the name come from?

Ledz:
It was a bit of a joke to start with. We called ourselves Operation Sandbaggers because we were sort of poking fun at ourselves and the players that sandbagged (playing in a division below their skill level). We WANTED to Sandbag but we didn’t want to hide the fact. We played the lowest divisions the events let us play, quite of lot of us were still pretty good so we certainly Sandbagged a little. The name quickly got shortened to Sandbaggers and that’s what it is today.

I don’t think we Sandbag any more, unless we can get away with it ;-) When we came up with the name I think we thought it would be a few tournaments then quit but we are still at it :-)

What kind of paintball modes do you play (woodsball, tournament etc.)?

Ledz:
I think the only thing we don’t play is Pump. We have 4 X-Ball Supair teams ranging from Elite down to Div 4. We have a pretty solid Woodsball squad. Some of the team also like Scenario / Big Games and a few of us even travel abroad to take part. With the MG100 Magfed Marker coming out from Planet Eclipse I think we will also see some players trying that out as well. If it’s Paintball we are up for it.

What are the biggest trophies you’ve ever won?

We won a good bunch of events last year and we plan on winning the odd event this year as well. But winning is just the icing on the cake. Playing Paintball with your mates and having fun, win or lose, is the best (Winning is better).

What does “watch out for the feckal denser” mean on your jersey?

Ledz:
If you know you know. If you need to ask, well….. Let’s just say that story can only be told in a bar with a beer in hand.

Is this the first time you've played at the SBG in Poland?

Ledz:
Yes, and we are super excited about it. Butch has been telling me to come for years but it’s always clashed with something else, it has this year as well as the UK’s biggest game North vs. South but sometimes you just have to stop putting stuff off.

We’ve heard you’re testing guns for planet eclipse. How do you test guns?

Ledz:
Yes indeed... That seems to be one of the Sandbaggers missions “Go and break this”. It doesn’t matter too much if a prototype marker fails with us because we don’t care too much. If we gave some prototype markers to our Pro teams and it failed in the finals that could cost them the event. If it happens to the Sandbaggers then it goes in the bag and we get something else out. The Sandbaggers test stuff all the time, some of the guys don’t even know that they are testing products :-)

We might have a new widget that we need testing so we just put it in one of the team guns and see what happens. Sometimes it’s best they don’t know what magic we are trying to create. As for how to we test them, just using and abusing them. In the lab and test rooms they get treated pretty well. Give a prototype to some of the Baggers and it will get treated pretty badly, dropped, smashed, stood on, used as a hammer, beer poured on it wet etc. etc. so pretty much a real world environment. Perfect test platform. Give it to some idiots and see what they break.

Ledz:
I took the MG100 out for the first time before anyone knew about it to a Magfed game at Paintfest in July 2018 and just used it. It was weird, nobody said anything to me or looked at what I was shooting or even asked to see it. This has never happened before, I used it in plain sight. It was months before we showed anyone else. I’ve not been heavily involved in the Magfed testing as it’s not my field of expertise but I’m hoping to rock a few at SBG.

Do you have any team rules?

Ledz:
We only have two really. 1 for the Baggers and 1 for people that are not yet Sandbaggers.

1… Don’t be a dick, have fun and look after our sponsors.
2… Don’t ask to join the Sandbaggers. If we want you to play with us we will ask you!

Baggin Ain’t Easy, why is that.

Ledz:
LOL, something we have just said for years. It’s probably very easy for most of the players (currently about 40 strong). They just get told where to be and what to bring and then they just turn up. For me and the Planet Eclipse Staff it’s a little bit harder because we have to literally wipe the arses of the rest of them. It’s actually quite sad and funny how bad they would be without someone helping them.

At least 3 times last year squads playing at the CPPS events got changed and were nearly leaving when they found out they were in the finals and then had to scramble to get ready again to play the finals.… AMAZING !!!

You have a small but decent Sponsors list. Why do they help you??

Ledz:
Yeah we are super lucky. We obviously have Planet Eclipse for Markers and Clothing. GI Sportz have been with us for years for masks (Grill and EVS), paint and loaders (LVL). Enola Gaye for Smoke and Pyro. HK Army is a new one for Packs (Zero G) and Cleats and another new one for 2019 is Clif Bars for Energy Bars/Gels.

As for why do they help? I’d like to say it’s because of our charm, good looks and charisma but I think it’s more to do with the fact that we do a good job of promoting ourselves and them along with it. I also think they can see that we do this for FUN. I never promise them results I just say we will do our best and we will try and smile on the way to 1st or last place. We give them all honest reliable feedback and I also think / hope that they can see what we are doing for the right reasons and maybe they like it.

Ledz:
Nope, we are getting ready for SBG and we are ready for some action on and off the field. We can’t wait. Let’s hope Brexit doesn’t ever happen so we can do this more and more :-)

Thank you very much Ledz for the interview and your time.